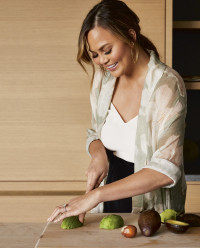 TV Personality, and New York Times #1 Best-Selling Author Chrissy Teigen is known for her clever, irreverent, yet savvy tweets and Instagram photos.  Although originally planning to be a chef, she discovered her passion for modeling at a young age. Teigen began her career as a swimsuit model and has since moved on to working with major labels all over the world.

On September 30th, Teigen released her kitchen and tabletop collection “Cravings by Chrissy Teigen” available exclusively at Target. The collection features over 40 items to prep, cook and serve ranging in price from $4 for drinkware to $140 for a 12-piece cookware set.

Teigen can also be seen on Paramount Network’s smash hit competition show, Lip Sync Battle. Currently in its fourth season, Lip Sync Battle is the most-watched original series in network history, averaging 3 million viewers, and is the top-rated series in its timeslot in the Adults 18-49 demo in all of cable. As a five time Sports Illustrated Model, Teigen appeared on the 50th Anniversary cover in 2014 along with fellow models Lily Aldridge and Nina Agdal, and was named Rookie of the Year in 2010. Teigen has also  appeared in W, Italian Vogue, Esquire, Elle, GQ, and on the covers of Glamour, Instyle, Marie Claire, Vogue Thailand, Elle Australia, Harper’s Bazaar Singapore, Self, Women’s Health UK, Cosmopolitan.

Teigen has been the face of various brands throughout her career and has participated in campaigns for such brands as McDonalds, Vita Coco, Chase, Samsung, TRESemme, La Mer, Coach, Gillette Venus & Olay, Captain Morgan, Stella Artois, and Target. She has also become a staple on best dressed lists for magazines like People and Entertainment Weekly for her elegant yet fashion-forward red carpet choices. In 2017, Teigen collaborated with Becca Cosmetics on a limited-edition glow face palette and most recently launched the Endless Summer Glow collection. She has also collaborated with fashion brand Revolve on an exclusive 36-item clothing collection, defined as “effortlessly sexy.” Teigen is also actively involved in several charities. She was recently awarded the “Heart of the City” award by City Harvest, a non-profit food rescue organization, for her fundraising efforts. She also helped to raise $1 million for the the American Civil Liberties Union (ACLU) in just two days.